How Smart Meters Are Helping Utilities With Voltage Management

Managing voltages to save energy and reduce peak-driven strains on the grid isn’t a new idea. Some of the original volt/VAR optimization (VVO) and conservation voltage reduction (CVR) schemes are decades old. They’ve helped save lots of energy, but they’ve also faced a key limitation: the need to avoid dropping voltages so low that they start causing problems for customers at the edge of the grid.

Knowing just how low voltages are getting at those grid endpoints is a really tricky task, however. Having sensors in place could help ensure the quality of power being delivered to customers and allow utilities to push the bounds of their voltage management plans.

Smart meters can be just that tool. And according to GTM Research, utilities are starting to make use of them for VVO and CVR on a broad scale.

In a few short years, automated metering infrastructure (AMI)-based voltage management projects have grown from a handful of proof-of-concept pilots to ten commercial-scale projects across the United States. These projects, along with several other pilots and planned deployments, are now managing voltages on grids that provide power to just over 5 million customers, or about 3 percent of the country. 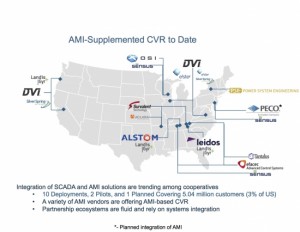 There’s a lot of fluidity to the partnerships out there. For example, Sensus, beyond its Wake EMC project, is working on CVR projects in Wisconsin, Tennessee and Pennsylvania. Landis+Gyr has its DVI-based projects, as well as a partnership with Alstom on a CVR project for Nashville Electric Service (PDF), and another with Leidos (formerly part of SAIC) for Fort Loudoun Electric Cooperative (PDF), both in Tennessee. Elster is also working both with DVI, as well as with Survalent and ABB in a project with big utility Entergy.

Survalent, in turn, is also working with Aclara on projects for the North Arkansas Electric Cooperative and for Tennessee’s Clinton Utilities Board (PDF), while grid vendor Efacec ACS is partnered with Tantalus and Sensus on two Tennessee utility projects. (Tennessee is a hot spot for CVR right now, with the federal Tennessee Valley Authority offering its distribution utilities financial compensation for power sales lost through lowered customer voltages under a pilot program with sixteen utilities.)

AMI isn’t the only way to monitor and fine-tune grid voltages. The Department of Energy’s smart grid stimulus grants funded 26 VVO and CVR projects (PDF), using both centralized and decentralized control systems and an array of grid sensors for the task.

North Carolina’s Progress Energy and Schneider Electric’s Telvent have deployed a commercial-scale CVR/VVO project aimed at cutting 385 megawatts of peak load, the equivalent to one fair-sized coal-fired power plant, that doesn’t include AMI. Utilidata, a company that’s raised $25 million to scale up its CVR technology, networks the devices that actively manage line voltages for most of its data.

As GTM Research smart grid analyst Ben Kellison recently observed, the fluid nature of these project partnerships indicates an important role for proper systems integration to make sure each is accomplishing its goals. So far, AMI-based CVR has been applied as a lower-cost option for small to mid-market utilities, he noted. Some projects are demonstrating cost-effectiveness in terms of energy savings, peak reduction, power quality improvements and other grid benefits. But whether each particular configuration is capable of delivering an operationally effective solution that reliably provides these benefits at larger scale is not yet clear.

Indeed, adding AMI measurements to existing, centrally managed VVO and CVR schemes may reveal how they’re falling short. After all, system-wide voltage changes that keep almost all distribution circuits within minimum voltage standards, but drop only one or a few feeder lines below those minimums, may have been hard to catch in the past.

Smart meter data can now provide a pretty reliable measure of where that’s taking place, forcing utilities to confront problems they didn’t know they had. Consider it the flip side to the benefits of having sensors at the grid’s point of contact with its end users. Sometimes they can help push the boundaries of existing technology solutions — and sometimes they can expose problems that require new technologies to solve.